Special information if you have experienced theft, burglary, vandalism, etc.

Special information if you have experienced theft, burglary, vandalism, etc.

From criminal offence to court proceedings

If the police find reasonable cause to suspect a specific person, they will bring provisional charges against that person. When the investigation is completed, the prosecution service will decide on any further action in the case.

The prosecution service will bring formal charges if they find that there is sufficient evidence to convict the provisionally charged person. When formal charges are brought, the case is sent to the court along with an indictment listing the charges.

Sometimes a case does not come before the court. This applies particularly to less serious cases, which can be settled by a fixed penalty, for example.

If the case has to be dropped

In some cases, the police deem that there is no basis for investigating the matter, for example, because it is not a criminal offence. The police will then dismiss the report, and the case will be closed.

The police may also decide to discontinue an investigation. This might happen if the perpetrator proves impossible to locate.

You can file a complaint against the police's decision not to investigate the matter or to discontinue the investigation. Even though the police have charged someone provisionally, the prosecution service may decide not to bring formal charges against the person. This can happen, for example, if there is insufficient evidence in the case.

If the case goes to court

If the police find the offender, and the case is to go to court, the prosecution service will send you a letter informing you that charges have been brought in the case. If you have to appear in court to give evidence as a witness, you will receive a letter about where and when the hearing will take place. Read more about giving evidence in court here. You will also be summoned to appear in court if you have made a claim for compensation against the defendant.

If you do not have to appear as a witness in court and are not making a claim for compensation, you can always ask the prosecution service when and where the court hearing is being held. As a rule, court hearings are open to the public.

If you want to claim compensation

If your insurance company has covered your loss, you do not need to take further action. If you do not have insurance, or if your insurance does not cover your (entire) loss, you can ask the police to include your claim for compensation if the case goes to court. The police will need proof of your loss. You can also attend the court hearing in person and make your claim for compensation. The police can help you with any questions about compensation.

When the case is closed

You can ask the court or the prosecution service for a free copy of the judgment. If you have not been called as a witness before the district court but have asked to be told where and when the case will be heard in the district court, you will also be notified if the judgment is appealed to the high court at a later time. You will also be told if you are required to appear as a witness in the high court. 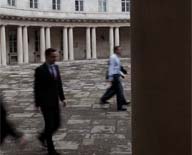 Read more about the Prosecution Service