Have you been a victim of psychological violence?

Have you been a victim of psychological violence?

This can be illustrated in the following way: 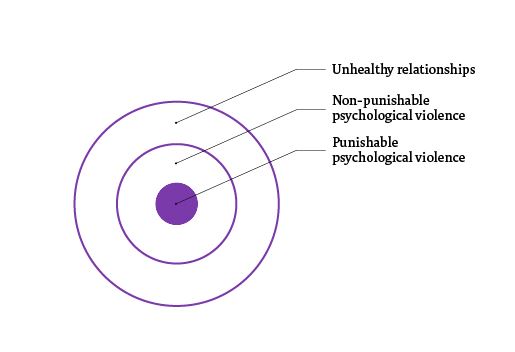 The conditions for the psychological violence being punishable by law are:

• The perpetrator must be connected to the victim’s household,

• The psychological violence must have taken place several times during a period after the act came into force on 1 April 2019.

• It must be a matter of a grossly degrading, harassing or offensive behaviour, and

• The behaviour must be suited to control the victim, i.e. a controlling behaviour, which prevents the victim in behaving freely.

It will always be a comprehensive assessment of all circumstances in a case, which decides if criminal proceedings can be initiated for psychological violence.

If you have been the victim of psychological violence, it may seem insurmountable and tough having to go through a police investigation and maybe a trial. We will do our best to help you along the way.

You can report punishable psychological violence by phone, in writing (also by email) or by turning up in person at the police station. You may experience that the police asks you to fill in a form about the sequence of events. On this form, you can note down the various episodes in order for the police to gain an overview of the extent and character of the psychological violence. It is not a requirement that you fill in the form. The police will still process and investigate your case.

The processing of the case by the police

When you have been the victim of a criminal act, the police will question you about what has happened. The questioning will normally take place at the local police station. The questioning can also take place at the scene of the crime or, in special instances, by phone. The police write down your statement in a police report. You will have the opportunity to read through the report and sign it, but you are under no obligation to do so. Sometimes it may be necessary to question you several times in the course of the investigation.

The police will also question other persons, who may have something to do with the case, e.g. the suspect or witnesses to the crime. Children under the age of 13 years are questioned by way of a video interview. This means that the police record the child’s statement on video. The police can use the video as evidence during a possible trial, so the child does not have to give evidence in court. The police can question children up to the age of 14 years, by way of video interview, in cases where the child or one of its nearest is the victim and where the suspect is one of the child’s nearest. Read more about video questioning of children.

The handling of the case by the prosecution service

If the case is to be decided in court, you will be summoned to give your statement. If you have a legal representative, you will go with this person. The legal representative can inform you of how things are handled and what you have to do. You may also bring along other persons, however, not anybody, who is giving evidence in the case.

Information about release on parole

Other possibilities of receiving help

If you need advice or guidance in addition to what you receive from the police, the prosecution service or your legal representative, there are several places you can turn to.

“Lev Uden Vold” (Live Without Violence) runs a national, anonymous hotline where you, as a victim of violence, a perpetrator of violence, a relative or specialist can receive help and guidance. You can contact the hotline 24 hours a day on +45 70 20 30 82.

Please see other organisations, which may also be able to help you.

Read more about The Prosecution Service