The Prosecution Service aims to deliver speedy and effective criminal prosecution of a high quality, and we focus actively on streamlining our administrative procedures. Using LEAN as a strategic tool to increase productivity, we have significantly improved our results in recent years.

In 2016, we implemented a new case weight model and changed the underlying data basis as of 2015. The new case weight model was applied for the entire period, but a minor data break in the calculation of the weighted case production from 2014 to 2015 meant the weighted case production for 2013-2014 had to be adjusted accordingly for the difference between the new and the old data model in 2015. Therefore, the adjustment for 2013-2014 is subject to some uncertainty. Because of the data break and the implementation of the new case weight model, the calculation cannot be compared with that used in the 2015 annual report. 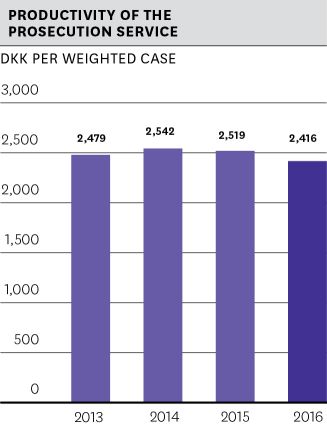 In 2016, the objective was to increase the Prosecution Service's productivity by 2 per cent compared to 2015. As the above figure shows, the Prosecution Service improved its productivity in the police districts through a drop in the average price per standard case of 4.1 per cent (measured as total payroll expenditure per weighted standard case), which we find satisfactory. It should be noted that production has been adjusted for individual cases with an extraordinarily large number of offences, including cases concerning non-compliance with the duty to report to authorities (immigration cases).

The Prosecution Service calculates its productivity on the basis of standard cases. All cases are assigned a weight according to a case weight model based on a combination of payroll costs and the number of cases within each case area. From 2013 to 2016, productivity increased by 3.90 per cent. 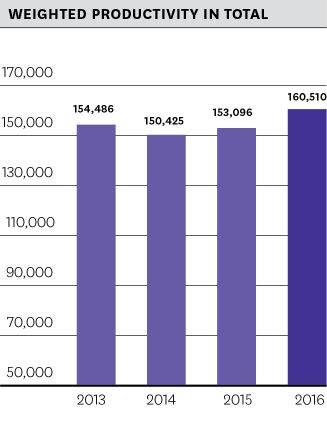 Criminal law cases are among the most serious. An increase in the number of formal charges brought in criminal law cases can be seen from 2013 to 2016, because in the period 2014-2016, formal charges were brought in a number of major cases comprising more criminal offences than in 2013. The percentage of convictions has been largely constant in the period. 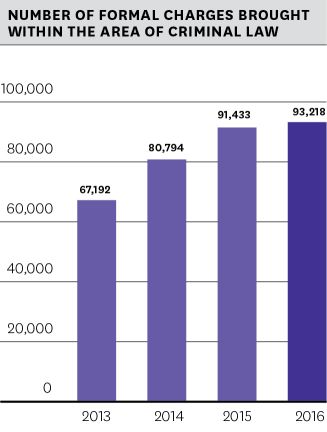 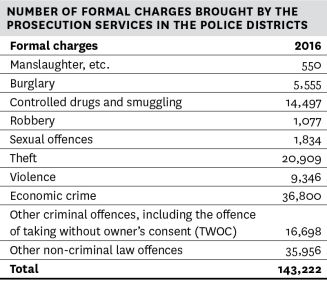